This book-length sequence by the critically acclaimed poet is a seeker’s story, revealing personal and historical traumas and how we search for understanding and meaning in their wake.

In Asylum, poet Jill Bialosky embarks on a Virgilian journey, building a narrative sequence from 103 elegant poems and prose sections that cohere in their intensity and their need to explore darkness and sustenance both. Taken together, these piercing pieces–about her nascent calling as a writer; her sister’s suicide and its still unfolding aftermath; the horror unleashed by World War II; the life cycle of the Monarch butterfly; and the woods where she seeks asylum–form a moving story, powerfully braiding despair, survival, and hope. Bialosky considers the oppositions that govern us: our reason and unreason, our need to preserve and destruct. “What are words when they meet the action of what they attempt to modify?” she asks, exploring the possible salve of language in the face of pain and grief. What Asylum delivers is a form of hard-won grace and an awareness of the cost of extreme violence, inexplicable loss, and the miraculous cycles of life, in work that carries Bialosky’s art to a new level of urgency and achievement.

“Asylum’s form—a hybrid, nonlinear series of numbered, untitled lyric poems and fragments—gives Bialosky’s lyric instincts a more epic platform, allowing her to play daringly and inquisitively with time and place . . . By turns symphonic, operatic, Dantean, intimate, timeless, and mythic, this quietly ambitious project is very much a book for the autumn of 2020.” —Lisa Russ Spaar, Los Angeles Review of Books.

“Haunted by her sister’s suicide and by political and environmental collapse, Bialosky finds refuge in nature and language, all the ways ‘the mind seeks / to keep itself from torture.’” —New York Times Book Review

As we grapple with a new normal, Jill Bialosky’s poetry might be the anecdote we all need. Her new book ASYLUM, a compilation of prose and poetry, evokes despair, survival — and most importantly, hope. — Katie Couric, Wake Up Call

“Few can distill the complex texture of grief and loss as Bialosky has so thoughtfully done in this collection.  It is as if her collection is telling us that the only way through grief is found through forgiveness and by realizing we are not the first to walk this treacherous path and survive.” —Iris Jamahl Dunkle, Green Mountains Review

“Her most ambitious work to date—demonstrates both searching consciousness about life and its meanings and a careful braiding of literary histories and contemporary influences . . . Inquiry unfolds through these poems as intellectual interest melded with open-hearted curiosity . . . Piecing together narrative from Dante or savoring meaning with Celan in the twentieth century delights the speaker in these poems. Bialosky rigorously grounds these poems in the literary traditions . . . With attention from both the mind and the heart to language’s sonorous resonances, transformation and reimagination are both at hand.” —Julie R. Enszer, Tikkun

“The elegiac fifth collection from Bialosky transcends genre, weaving tragedy, language, and perception in a poignant work of personal and public exploration … Here she explores language as an all-encompassing source of longing, consolation, redemption, and preservation … Erudite and devastating, Bialosky’s timely collection reverberates with a rare empathy and resilience.” —Publisher’s Weekly (starred review)

“This graceful, spiraling, often elegiac, always vivid book-length meditation casts shifting light on family, self, and the drama of the living world. Whatever is illuminated, so precisely, so gracefully, is also shadowed. [Bialosky’s] touch is light yet trenchant, her cadence entrancing, her wonder elating, her sorrows chilling . . . We enter ‘asylum of thought / & afterthought,’ the inner precincts of a poet tracing the nexus between mind and body, human and nature, life and death, while sheltering the small flame of hope, so tenuous, so necessary.” —Donna Seaman, Booklist

“Jill Bialosky’s fifth collection, Asylum: A Personal, Historical, Natural Inquiry in 103 Lyric Sections (Knopf), is also an exploration of personal loss and its aftermath — in this case, the poet's sister’s suicide —through widening circles of allusion, reference, and metaphor. {with} lyrical empathy and deep intelligence the poet brings to every page.” —Washington Independent Review of Books

“From personal story of a sister's suicide, to chants and whispers and lullabies assembled in a way as to create a book of days for this moment of terror and elegy, this book investigates into the ability of language to provide answers and comfort at the moment when there is no comfort to be found, and no answers: when all we can do is ‘at the edge of the Hudson to watch the tugboats / & remind ourselves we live on an island of buildings. / The mayor warned us not to go out.’ And yet, the poet insists—beautifully, gracefully, memorably—on seeking a sanctuary: ‘asylum / in which the mind seeks / to keep itself from torture, asylum of thought / & afterthought, asylum / where birds mate & nourish.’ Indeed. May we all find such asylum.” —Ilya Kaminsky

“Asylum is a refuge; from grief, and from threat of extinction. Bialosky weaves together the big cosmic time of trees and the natural world, with the detailed, apparently ordinary time of one woman’s everyday life. The result is an exquisite contemplation of what it is to live after one has lost a sister to suicide; what it is to live in a post-holocaust world, and what it is to live among trees. The litany of memory, individual and collective, becomes fugue, becomes mantra. “Like trees, / we all eventually fall”, but we are richer with the quiet asylum of Bialosky’s poetry. Whether you are a yoga lover, a tree lover, a mother, a reader, a sister, you will find something to love in this luminous collection.” —Sarah Ruhl

“Asylum, Jill Bialosky's Asylum, is her strongest collection to date. Here she writes beautifully of a journey from despair through a dark wood, invoking Dante, Blake, and Paul Celan on the way. Memories of personal and worldly violence paradoxically enable her to see things in their luminous clarity: a fallen bird, a frail daffodil, butterflies mating, snow that tastes of rust and weighs on branches. So compelling is her vision, so urgent her perceptions, that her grief becomes our grief, her world ours. We are with her on every step of a search that ends in art, and in a language that can save us.” —Grace Schulman

“Reading Jill Bialosky’s poems feels like taking a slow and lone journey into the depth of the human heart, yet all the while being accompanied and guided by an intimate voice. An urgent and expansive book, Asylum is a must-read for anyone who ponders over life and death and all that comes in between.” —Yiyun Li

“Jill Bialosky’s Asylum is a collection of terse forms and psalms that add up to a powerful, full-throated deliverance. Each trope captures life and death matters—a singing, a keening, within each taut, well-made release. Rather than craving a physical space, asylum is sought in language, metaphor, meditation, yoga, query, and hope. And one of the joys of reading this collection is to feel its poignancy through verbal accretion. Asylum is experimental and, at times, nearly classical, but always intently alive with lyrical truths.” —Yusef Komunyakaa 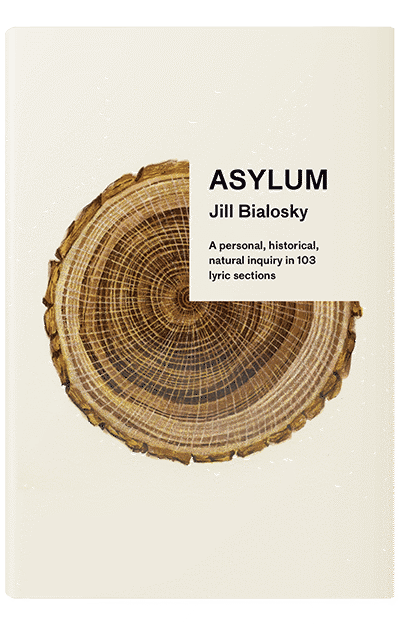