Something terrible has happened and I don’t know what to do. An unnamed narrator’s life is unraveling. Her only child has left home, and her twenty-year marriage is strained. Anticipation about her soon-to-be-released book of poetry looms. She seeks answers to the paradoxes of love, desire, and parenthood among the Greek and Roman gods at the Metropolitan Museum of Art. As she passes her days teaching at a boys’ prep school, spending her off-hours sequestered in the museum’s austere galleries, she is haunted by memories of a yearlong friendship with a colleague, a fellow poet struggling with his craft. As secret betrayals and deceptions come to light and rage threatens to overwhelm her, the pantheon of gods assume remarkably vivid lives of their own, forcing her to choose between reality and myth in an effort to free herself from the patriarchal constraints of the past and embrace a new vision for her future.

The Deceptions is a page-turning and seductively told exploration of female sexuality and ambition as well as a human drama that dares to test the stories we tell ourselves. It is also a brilliant investigation of a life caught between the dueling magnetic poles of privacy and its appropriation in art and literature. Celebrated poet, memoirist, and novelist Jill Bialosky has reached new and daring heights in her boldest work yet.

“I was immediately swept away by this searing, elegant portrait of a woman in a place of psychological and emotional precarity. Jill Bialosky brings us into a world that becomes so real we cannot look away. The Deceptions is at once mesmerizing and masterful.” —DANI SHAPIRO

“The great Greeks—Odysseus, Heracles, Aphrodite, and, centrally, Leda and the swan—circle around this powerfully written account of a woman in a kind of slow crisis and help her interrogate her marriage and desires. Then, in an extraordinary, explosive final act, a profound act of betrayal lifts the novel toward genuine tragedy. The Deceptions is a deeply felt and formally original tour de force.” —SALMAN RUSHDIE

“At once classical and contemporary, Jill Bialosky’s powerful new novel weaves together themes of art and life, sexuality and family, gender dynamics and selfhood. The Deceptions is urgent, unsettling, and utterly consuming—a triumph.” —CLAIRE MESSUD

“In stunning, finely tuned prose, Bialosky captures the music of marriage and the complexity of female ambition, sexual hunger, and rage in her newest novel. Myth, archetype, and history come to life in The Deceptions, and in the end we are returned to the present and the question of what it is to be human, to risk, to fail, to suffer the pain of love.”—A. M. HOMES 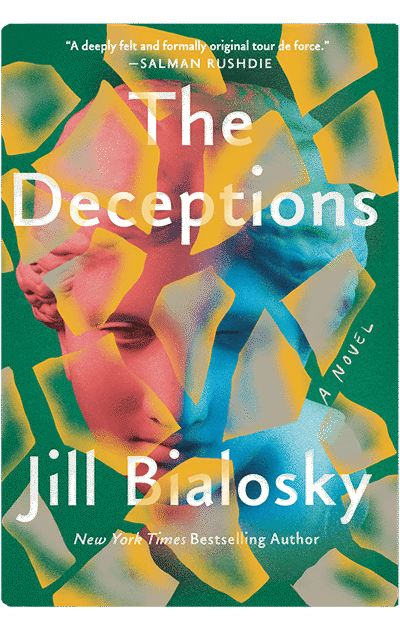